Lots of folks today are struggling to save shekels in this broke-back economy and that’s ezzacly why the Samurai’s here. One budget item that many households don’t have a good handle on is the electric bill. With just a little information from the appliance name plate and some third-grade math using a calcumulator, the Samurai’s gonna show you how to quickly and easily figger out how much electricity each of your appliances, large and small, are using.

Just like in a budget, you usually can’t point to any one item and say, “Aha! There’s the big money drainer!” Instead, it’s usually a process of “death by a thousand cuts”– trimming a few pennies here and a few pennies there and, next thing you know, you’ve saved some real money.

Kilowatts are just watts x 1000. Your power meter actually measures kilowatts over a period of time, called kilowatt-hours (abbreviated kWh). This is simply the amount of kilowatts your home is sucking off the grid times the number of hours. This is the sum total of all electricity usage going in your home at any given time.

Since many appliances have a range of settings (for example, the speed of a washing machine spin or the heat setting on a dryer), the actual amount of power consumed depends on the actual setting used when you run the appliance.

Special note for refrigerators: For older models, you can estimate the number of hours that a refrigerator actually operates at its maximum wattage by dividing the total time the refrigerator is plugged in by three. Even though it’s “turned on” all the time, the refrigerator compressor actually cycles on and off as needed to maintain interior temperatures.

One solution for finding the power consumption on these newer refrigerators is to use the Kitt-a-Watt meter (discussed below) to directly measure the refrigerator’s power usage.

Now, multiply this by the number of days you use the appliance during the year for the annual consumption. You can then calculate the annual cost to run an appliance by multiplying the kWh per year by your local utility’s rate (on your power bill) per kWh consumed.

Now for those promised examples:

Suppose you have a window fan that has a watt rating of 200 watts stamped on its nameplate and you use it four hours/day about four months out of the year. And suppose your power rate is 8.5 cents/kWh (this is pretty cheap power, BTW– up here in Yankeeland, we pay over 18 cents/kWh! The rate will vary widely– check your power bill for your actual rate). Let’s see how much that sucker’s costing you:

Let’s tackle another one…

Suppose the compooter on your desktop has a wattage rating of 120 watts stamped on its nameplate or somewhere in the manufacturer’s tech specs. Let’s also suppose the monitor you’re using to read this web page has a rating of 150 watts and you use your compooter about four hours per day, year ’round. Again, we’re just using the power rate of 8.5 cents/kWh for an example. So how much is that costing you?

Sometimes, the wattage isn’t stamped on the appliance and they might only give the amps instead. Amps is a measure of the electric current draw; it’s a measure of flow like gallons per minute from the BP oil gusher, same idea. 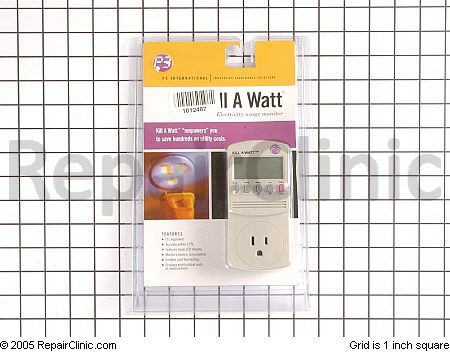 For rough estimate purposes, here are some typical wattages of various household appliances.