Your Precious Words:
I’ve had an issue a couple of different times with my Whirlpool Duet Dryer and it concerns me. Three different times, there has been enough lint accumulated in the lower compartment that it caught on fire. I’ve checked the exhaust vent and clean it regularly, same for the bottom compartment. Still, it seems like a considerable amount of lint makes it down to the bottom compartment. What happens then is that the lint catches fire and burns for a small time, melting the thermal fuse and shutting the gas valve down. My question is: Is this normal or am I missing a part (like a burner shield or something)? We clean the lint screen every load. One issue I suspect is that the felt seal on the front of the drum is failing (I can see it hanging out in a couple of places). Would that cause this problem? It also seems to take a considerable amount of time for our dryer to get our clothes dry (two-99 minute cycles per load usually does the trick).
What can I do???

What a timely question– I just wrote about this very scenario in the January issue of my award-winning newsletter, Appliantology: How to Use Your Dryer to Get Out of Your Mortgage.

That issue was such a home run with the jingle mail crowd that I did an encore presentation in the February issue: A Visual Guide to Dryer Vent Proctology.

BTW, if you’re not a subscriber to our free newsletter, Appliantology, you’re really missing out on Special Samurai Secrets™ like the ones mentioned above and much, much more! Subscribe to Appliantology today!

Okay, with that bit of shameless self-promotion out of the way, let’s move on to how we can fix your dryer problem. As explained in the two aforementioned Appliantology newsletter issues, the problem with your dryer is a bad vent. What makes a bad vent? Excessive back pressure. Also note that a vent can look good and still be bad or marginal. Watch this:

For the average homeowner, it probably makes more sense to buy and install a product like the LintAlert dryer vent monitor. It’s a lot less expensive that the tester I used in the video above and, once you install it, there’s no set up rigamarole to do– it just quietly monitors your dryer vent as you use it and lets you know if there’s a problem as it develops. It monitors the dryer vent system and displays a percentage of blockage. And LintAlert works with both gas and electric dryers, despite what you’ll read at the RepairClinic site where it says, “For gas dryers only.” This is not true. It works the same exact way on both gas and electric dryers. For electric dryers, you’ll need to plug the LintAlert device into a nearby 120vac outlet, the washer outlet will work just fine. 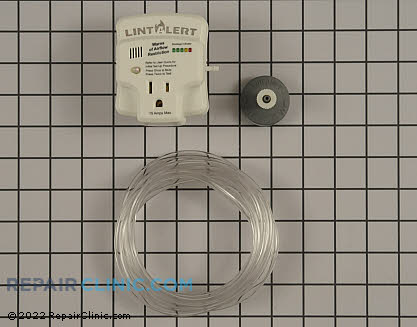